I'm back. My two friends and I had an excellent ride. (until the last day). When we left last Thursday, the wind was already up to gale force, or 40 miles an hour, gale enough for me. All we heard about was, watch out for the wildfires! Here's our first stop and you can see that West Texas truly is a diverse land. 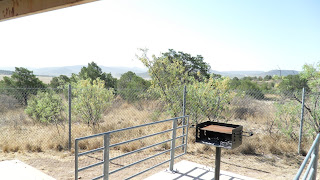 Along the way, we did see some burned-out land. Once or twice, we did smell smoke. These pictures are between the border and Fort Davis. It's sad to see this, but it is natures way. If we could get some good rain, this land would come back with a vengeance, and before this season's over.


This was down along the Rio Grande, the river ride, we call it. Right across the river is Mexico. I thought this movie set was extraordinary. Larry McMurtry is one of my favorite authors. I have read practically all of his books. And who doesn't love Lonesome Dove?

While I'm on the McMurtry subject, are you familiar with his son James? I think this guy is terrific and have seen him in person several times. I'm impressed with the father and the son. Way to go McMurtry's.
One of my very favorite parts of this loop we just made was Fort Davis on Saturday night. We met quite a few characters, heard some sad stories about the fire, and just had a mellow evening. We stayed at the Stone Village Tourist Camp.click here It was built back in the 30s and has been recently renovated. I thought my little room was so cool. The front wall and front door were made of screen. It was very cool with a light breeze at night, which makes sleeping perfect.
We left relatively early Sunday morning, skipped breakfast for a bigger lunch later on, when this happened. I'm about 4 miles south of Pecos, Texas on Highway 17. It's one of those things that every motorcycle rider dreads. I had a rear blowout doing 70 miles an hour. I have owned and ridden motorcycles for over 45 years. I've never had a flat on a parked motorcycle, much less one at highway speed. I didn't really have time to get scared, just trying to hang on and get my bike stopped. I finally hired a guy to come get me from Odessa. He brought a dually truck and trailer, loaded me and the Harley up, and took us to town. I spent the night in a motel and the Harley spent the night the garage. Monday at lunch, I was back on the road, headed home. Here's a few more pictures of the trip.
﻿﻿﻿﻿﻿﻿﻿
﻿﻿﻿﻿﻿﻿﻿

Thank you all for coming by, I enjoy your company.