“Life is Hard….It’s even Harder if you're Stupid”

The title is a quote from that famous American, Marion Mitchell Morrison. We will celebrate his birthday on May 26. We know him better by his stage name, John Wayne. We remember him for his distinctive voice, rugged walk, and towering presence. He epitomized rugged masculinity and has become an enduring American icon. Not only all of that, but he's always been one of my heroes. I looked at a lot of portraits of the Duke, and finally narrowed it down to these two. 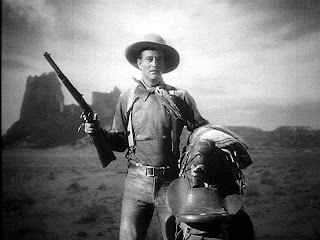 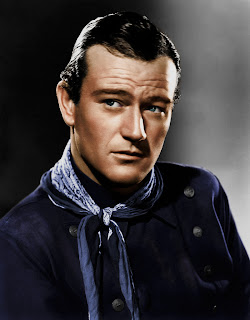 See why it was hard to choose?
I've compiled a list of John Wayne quotes. There are some from the movies and some from real life.
I haven't lost my temper in 40 years; but, Pilgrim, you caused a lot of trouble this morning; might have got somebody killed; and somebody oughta belt you in the mouth. But I won't. I won't. The hell I won't!"
- John Wayne - To Leo Gordon in McLintock!
"That'll be the day!"
- John Wayne - The Searchers
"Fill your hand, you son of a bitch!"
- John Wayne - True Grit
"Don't apologize-it's a sign of weakness."
- John Wayne - Speaking to his young cavalry lieutenants in She Wore a Yellow Ribbon
"I won't be wronged, I won't be insulted, and I won't be laid a hand on. I don't do these things to other people, and I require the same from them."
- John Wayne - The Shootist
"I'm looking at a tin star with a ... DRUNK pinned on it."
- John Wayne - El Dorado
"Courage is being scared to death - but saddling up anyway."
- John Wayne
"Talk low, talk slow, and don't talk too much."
- John Wayne
"Tomorrow is the most important thing in life. Comes into us at midnight very clean. It's perfect when it arrives and it puts itself in our hands. It hopes we've learned something from yesterday."
- John Wayne
"I've always followed my father's advice he told me, first to always keep my word and, second, to never insult anybody unintentionally. If I insult you, you can be damn sure I intend to. And, third, he told me not to go around looking for trouble."
- John Wayne
I remember as a child, going to the movies and seeing John Wayne. The Searchers came out in 1956. It continues to be widely regarded as perhaps John Wayne's finest and most complex performance.

One afternoon, here in Lubbock, Buddy Holly, Sonny Curtis, and J I Allison went to see The Searchers, at the State theater in downtown Lubbock. It played there in June of 1956. John Wayne's frequently used, world-weary catchphrase, "That'll be the day," was taken home and forged into this abiding rock 'n roll hit. I love it when I can twine two of my heroes together, at one time.

I Love This
They are talking to SIR PAUL
(McCartney)
I really didn't get a lot of work done today, I took my sweet neighbor to Walmart. It's funny when you're with a friend, even mundane chores can seem like a pleasure. I don't really feel guilty about not working outside on my house, because we had what's being considered as 'Dust Bowl 2011'. There were times, it had to be over 50 mph. But as Scarlet says, "There's always tomorrow".

I've been in Blogger-Hell lately. It's been called to my attention that my blog is not updatng in your blogrolls. I'm trying to fix it, with very little help from the blogger people, but I'm persistent, and if there is a cure, I'm going to track it down. I looked at all of my HTML, and it looked like those screens on the movie The Matrix . I'm smart enough to not monkey with code. If you do receive my blog via a feed, let me know whether or not it updates on your rolls. If you don't know what I'm talking about, drop me an e-mail and I'll try to explain it.(What little I know about it).

Thank you, everyone of ya'll, for stopping by and having a little read. I really do appreciate it.


For today's laugh, here's a joke I heard the other day.....
THE FROG AND THE FEMALE GOLFER
A Woman was out golfing one day when she hit the ball into the woods.
She went into the woods to look for it and found a frog in a trap.
The frog said to her, "If you release me from this trap, I will
grant you three wishes."
The woman freed the frog, and the frog said, "Thank you, but I
failed to mention that there was a condition to your wishes.
Whatever you wish for, your husband will get times ten!"
The woman said, "That's okay."
For her first wish, she wanted to be the most beautiful woman
in the world.
The frog warned her, "You do realize that this wish will also
make your husband the most handsome man in the world, an Adonis
whom women will flock to".
The woman replied, "That's okay, because I will be the most
beautiful woman and he will have eyes only for me."
So, KAZAM-she's the most beautiful woman in the world!
For her second wish, she wanted to be the richest woman in the
world.
The frog said, "That will make your husband the richest man in
the world. And he will be ten times richer than you."
The woman said, "That's okay, because what's mine is his and
what's his is mine."
So, KAZAM-she's the richest woman in the world!
The frog then inquired about her third wish, and she answered,
"I'd like a mild heart attack."
Moral of the story: Women are clever. Don't mess with them.
Attention female readers : This is the end of the joke for you.
Stop here and continue feeling good.
Male readers: Please scroll down.
.
.
..
.
.
.
..
.
.
.
.
.
.
.
.
.
The man had a heart attack ten times milder than his wife ...
Moral of the story: Women are not really smart, they just think
they are.
Let them continue to think that way and just enjoy the show.
PS: If you are a woman and are still reading this; it only goes
to show that women never listen!!!