Here it is Monday, again. Isn't it funny how we can recycle? I'm serious about this. Who among us does not have some romantic tragedies? You know, heartbreak. Yesterday, I spent about two hours on YouTube. I went down some memory lanes and came up with the following. In 1982, I moved back to Texas, from Boulder Colorado, after living there (Colorado), for two years. I moved up there to change my life. Prior to that, I had been married and spent the previous 10 years, living in Santa Fe, New Mexico. I had a pretty good life in New Mexico. My wife and I had two children (Mia and Janna) while we lived there. Then, divorce reared its ugly head. I hung on for about six months, and then at the urging of my friend, Earl Biss, I made the move to Colorado. I would consider those my 'wild and woolly' days. One thing I did notice about Boulder was everything seemed to be uphill, and it snows in June! Yes, I gave up and came back "home". During this early period in Lubbock, I met an amazing, older gentleman named Carlos Shipley. Carlos was quite a colorful character. He was just fun to be around. One Saturday morning, Carlos called me and said "Let's go see my nephew, he's playing in Abilene. Texas". I was very familiar with Carlos's nephew. In fact, he had been my hero for quite some time. Here’s a picture from that week-end. 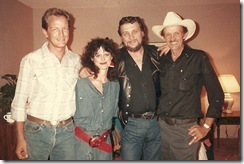 That's right, it's Waylon Jennings. I have been a fan of his since my early childhood. In the picture, starting from the left is a younger version of me, Waylon's lovely wife Jessi Coulter (with her arm around me), Waylon (my hero!), and Uncle Carlos. After this picture was taken, we all got on Waylon's bus, along with his mother (Carlie), and went to the concert hall. Waylon became my friend that day, and remained so until his untimely death. All of that brings me to the point of all this rambling. When I get melancholy, I tend to resort to listening to my friends, many of whom, have videos on YouTube. I had never heard this particular video, but I found it yesterday and would like to share it.


Really good, huh? Here's a couple more by Waylon. The first one, America, always gets me in the mood to travel. I especially appreciate what he says about Indians. As some of you know, I lived with the Crow Indian tribe up in Montana. Of course, that's another post that I will save for another day. The next video is really a piece of history. It's Hank Williams Jr. and Waylon having a musical conversation about Hank Williams. I think it's absolutely amazing.

America
the conversation
If you have been reading my blog, you also know that I am friends, and a great admirer, of Billy Joe Shaver. The amazing part is that he and Waylon have been colleagues for many, many years. Here are the two of them, singing a song about one of my very favorite places.....TEXAS!!

I love the line where Waylon's ex-wife says "I need a man with a real job." You think she ever regretted that remark? Okay enough fiddling around, I got work to do. I am marching down the road to happy destiny, you know? And I got to say, this converting to a full-time RV'er is work. I'll talk to you later.


Thank you so much for stopping by. It means the world to me, right? Right!