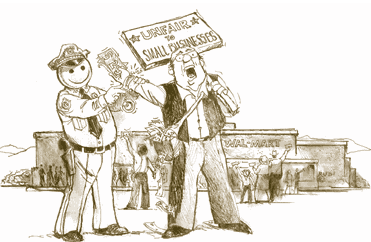 We all have something we like and don't like about WalMart, right? This is the story of a man named Joe Chumley. This is the account of his run-in with the corporate giant. It was taken it from the Roswell Newspaper....

Wal-Mart protests stir Roswell arrest
Published: Sunday, January 04, 2004
ROSWELL, N.M. (AP) — Police arrested a local businessman for protesting in front of the Wal-Mart here Saturday.
Joe Chumley's arrest capped the second day of protests at the supercenter, the Roswell Daily Record reported.
Chumley, the owner of the local Farmers Country Market, was thrown out of the store Friday for passing out $2 bills and was subsequently banned from Wal-Mart stores nationwide.
On Saturday, about 35 of Chumley's employees and customers gathered in front of the store's doors to protest the ban, said Hector Lujan, a country market employee for 26 years.
Lujan said his boss believes small-business owners are being trampled by retail giants like Wal-Mart and is concerned about small businesses' ability to compete against such large corporations.
Chumley could not be reached for comment late Saturday.
A Wal-Mart assistant manager declined to comment during Saturday's protest, referring questions to the store's corporate offices.
Chumley was charged with criminal trespassing and resisting arrest and was released on his own recognizance.
Lujan said the country market has lost about 10 percent of its business since Wal-Mart opened.
......This is my Uncle Joe and I have to say I am proud of him. Banned from Walmart..... Nationwide? For life? Cool! Way to go Unc!!!(this story made national news) I am proud to add that he doesn't have a Harley. He has three of them...at last count. Ride on Uncle Joe!!

Very clever and funny
Just a short paragraph on my progress as house seller. I'm still working with the people that had the house inspection done. How hard is it to make your mind up and jump off into your dream house? We seem to be $24k different on the price. I hope it works out. I had a realtor contact me. She had some cash buyers and I allowed her to show the house to them three times. They had a question about the square footage and hired a professional to come and measure my house. I measured the square footage from the outside of the house. This guy measured only living space, and did not include the stairwell, or the hallways, or the closets. He trimmed about 500 ft.² from my figures. The realtor asked me how I came up with my pricing, and I told her I figured the square footage at a certain dollar amount, and then I added in the location, location, location. These folks can find the house as big as mine for less, but it won't be on the waterfront. Go figure!   Let me show you what I've had of my driveway during the last 30 days. I haven't bought anything, but I've sure had some stuff brought over for me to look at..... I hadn't really made up my mind about my toy hauler, yet. In all honesty, I need the money from my house sell to be able to get to what I really want. Of course, that doesn't keep me from searching on the Internet for the perfect one. It is almost been an obsession. I will admit, I scrounge eBay almost every day. But you know, it is gonna be my only home, so I need to look at everything the market has to offer. That's about it from around here. At the end of next month (September), I have a friend who is going to receive a big honor, here in Lubbock, Texas. His name is Jesse "Guitar" Taylor. I will do a writeup all about him, later. Here's one of his music videos and a gratuitous photo....
Jesse 'Guitar' Taylor
I gotta say, I've missed you guys. Thanks for coming back!! Michael Ultra